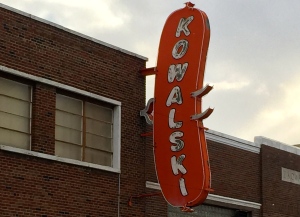 For the third year in a row, a year-end field team is verifying utility installed energy efficiency measures in homes. Most of them in Detroit. Most of them lower income. And, we have stories to tell.

The initial image going into Detroit is dominated by abandoned, burned and crumbling buildings. After decades of exodus, it infects every neighborhood. Upon closer look, these neglected structures and their sites are oddly clean. Scavengers pick over them repeatedly for every salable or usable item. Nearby residents, in an attempt to reclaim control of their neighborhoods, persistently collect the blowing trash. Years of wind, rain and sun scour the remnants like skulls in the desert. These piles of destruction are transforming into the ruins of an industrial era.

After weeks of navigating the city, a more conscious notice revealed the thin tough layer of humanity. People live here. A Danish bakery, a Polish market and a Coney Island are still in business because others failed first and those that remain need to eat. Scotty Simpson’s Fish & Chips (third owner but original decor from 1950) in Riverdale only takes cash. Harry very graciously told me to just pay the next time I come in. Alicia at Motor City Java House (Detroit’s original and home base for Motor City Blight Busters) in Old Redford knows my name. A trustee at the Church of the Messiah in Islandview wants to motivate the individual members of his congregation to take responsibility and control in charting a new course for their energy use. The pillars of the community are already here.

After a couple years of wandering these neighborhoods, a unique layer in the landscape revealed itself. In a fairly dense neighborhood of 1940s brick four-plexes, a beautiful fat and happy pheasant trotted across the street in front of my car. Thinking it was a rare siting, I told everyone for the next few days. A local property manager smiled at my excitement and then enlightened me. The pheasant population has been growing consistently on the east side, not on the west side, as nature is taking back large sections of the city. He described a blind of waist high grasses a few blocks away where he estimated dozens lived. I would only see them if they were flushed out of hiding. I found the blind. Even if I didn’t need to keep moving to get to my next appointment, I don’t think I could disturb them. I am not a hunter.